Okay, so I have previously complained about my IIH headaches and the fact that they can’t really be treated with most forms of pain relief medication, but I didn’t really explain that in any depth.

There’s some evidence that opioids like codeine can raise intracranial pressure, and I can testify to that. I’ve tried both immediate release and prolonged release versions, and neither were helpful. Last time my headache reached 7/10 level pain, I went to the emergency department at the hospital, and they tried me on codeine… an hour later, my headache was worse, more like 8 or 9 outta 10! So yeah, flag that.

Paracetamol and ibuprofen, when layered correctly, can take the edge off, but as you’re not supposed to take them continuously, having non-stop headaches for over a month has these less efficient.

So here’s my methods of coping:

Okay, I admit, that’s not really what IIH stands for. In actual fact, it’s Idiopathic Intracranial Hypertension, a.k.a. Pseudotumor Cerebri and it means that there’s too much cerebral spinal fluid in the subarachnoid space in the brain, causing high pressure that results in all sorts of fun symptoms.

For me, it’s currently showing itself as non-stop headaches that rate on a pain scale from 4/10 all the way up to 8.5/10, and are immune to or made worse by most forms of pain relief medication. 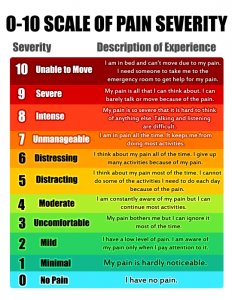 With the head pain comes nausea, pulsatile tinnitus, and increasing difficulty with vision as the pressure gets more intense. It’s… less than ideal.

I was initially diagnosed in 2013, after a visit to the optometrist ended with a referral to the ophthalmology clinic. I’d been having headaches for a while, but put it down to needing a new glasses prescription. Turns out my optic nerve was swollen, which is one of the symptoms of IIH (as well as a bunch of other stuff which had to be ruled out, yay). After spending an entire day at the eye clinic, I was referred to the neurologist, who prescribed me a medication called Diamox while he put me on the wait list for a lumbar puncture. I was also recommended to lose weight, as one of the suspected triggers for IIH is sudden weight increase and/or obesity. The Diamox, otherwise known as acetazolamide, gave me an incredible pins & needles sensation in my hands, but didn’t do much else. I lost more than the recommended weight, but with no relief. And then came the LP.

I was lucky enough (she says, tongue firmly in cheek) to have a medical student there for my LP, so he gave it several tries – to the point that a 10 minute procedure became a 90 minute one, still unsuccessful. My poor hubby, never great around needles, was waiting down the hall, freaking out as the longest 10 minutes ever stretched on and on. When I finally gave up and asked them to stop, he came in to find me curled, crying, on the bed, covered in marks and iodine. It was not a great day.

So, back on the waiting list I went, until April 2014 when a slot opened and I was able to have a fluoroscope-guided LP. It still wasn’t easy – even getting a line into a vein required the doc to use an ultrasound machine and the procedure itself took 90 minutes – but I was zoned out on pain relief for most of it. I say most, because the worst part for me was the 2 hours I spent post-LP, having to lie flat so as to avoid a low-pressure headache. I’d forgotten to use the toilet beforehand, and by now my bladder was close to bursting, but I was damned if I was gonna use a bedpan or have a catheter inserted!

With IIH, a lumbar puncture is both a way to diagnose and relieve the symptoms. My pressure was definitely high, and they removed 30ml of fluid. The next day, no more headaches. Like magic, only science. And maybe a big dose of luck, because it doesn’t work for everyone.

So now I’m waiting again, this time on a different medication called Topamax, for my neuro & LP referral to come through. Tonight is a good night; I’ve only had 2 paracetamol, and my head pain is down to 4/10 so I can actually think.